Greetings from the sunny Golden state of California. A Girl, Her Hubs and a Suitcase are keeping it local in the USA for this short weekend excursion.  Los Angeles, our home base for this quick getaway has been on the wish list for a long time. Exceptional airfare and an impromptu decision was all that was needed for this traveling team.

An uneventful, ungodly early flight landed us in this luminous land of sea and mountain.  Residing from Florida, this duo understands the power of the sun. However, the intensity and powerful rays here is a different kind of potency that radiates the scalp and tickles one’s cheeks with commanding strength.

We picked up our black, shiny Chevrolet convertible Camaro, top down, navigator out and ready to tackle the 6 lane traffic of the 405. This Girl thought she knew traffic-however, car congestion of this sort, merging and all sorts of automobile trickery was a whole new sort of madness never before witnessed.

Nevertheless, this was little concern as the blue skies, earthy mutton colored mountains in the distance and that beaming powerful sunshine bounced off our vulnerable heads. Time had little meaning as vacation officially had commenced and we had a mission to find our residence for the next 3 days –The Los Angeles Athletic Club http://laac.com/ .

The LAAC is located in the heart of downtown LA. This historic building dates back to the 1880’s and evokes a feeling of old world charm mixed with vintage athletic royalty.  Antique sports paraphernalia adorn the walls, a decorative “bragging rights” of sorts. Included in this unique hotel is also a pool and a gym. Sadly, this amenity has been unutilized due to time constraints.  However, during booking this hotel this was a nice selling point.

Throughout the hotel, there is no lack of attention to detail to the furnishings and charm of this establishment. Our room located on the 12th floor is cozy, large and quite pleasing. The view attempts to highlight the LA skyline, if it weren’t for the obstructive scaffolding directly in its way. Regardless, this respite is specifically for utilitarian needs, sleep, rest, eat and shower.  All of which, this hotels exceeds on.

After dropping off our bags, we ventured out to china town http://chinatownla.com/. The sun was beaming down powerful and strong luminescent beams of California sunshine. Our journey was a pretty much straight line through the urban corridor of downtown Los Angeles. We passed Hispanic owned shops with vibrant colors and authentic music spilling out onto the sidewalk. Next, we passed the governmental section- the famous OJ Simpson courthouse, unique street artwork decorated the otherwise white wash boring structures.

Approaching china town a raised giant dragon straddling both sides of the street ominously welcomed the newcomer. Hunger began to grumble curiously as the smells of foreign fragrances permeated the air. Doing a quick Yelp search we settled on a restaurant -Yang Chow http://www.yangchow.com/. We were still on Eastern Standard Time and it was fairly early for dinner, however this place was packed. The friendly waiter offered us complimentary tea, which I have not seen in over a decade. The menu was inviting and tantalizing and conjured up old school dishes such as dumplings and shrimp toast. Which, we did in fact order. Be warned though, the dumplings are made from scratch and took 20 minutes to bring tableside.

Long, ropey flavorful vegetarian noodles and Mu Shu pork served as our entrees. These flavorful and beautifully presented dishes were well worth the wait and quenched our Chinese cuisine desire we were yearning for.

From dinner, bellies full and MSG coursing through our veins, we lounged outside sipping coffee at the local Starbucks. This young trendy area was teeming with millennials and eager youth ready to start the weekend. We sat there as the California autumn chill began to settle in. We made our way slowly back to the hotel remaining on Florida time and tuckering out pretty rather prematurely.

The next morning we rose rather early excited to get to know the area and see the sights. A complimentary breakfast was included in our stay which was hearty, fresh and delicious. We feasted on our breakfast in the art deco dining room as the sun began to stream in through the windows.

We got in our convertible, top down, windows open and soft rock blasting through the radio. We drove through the alarmingly congested traffic – that would become the theme of the short packed 2 day trip. Peeking out in the distance, the famous Hollywood sign waved at us as if inviting us to play for the day. A fairly swift uneventful drive landed us on the Sunset Strip http://www.visitwesthollywood.com/special-interest/sunset-strip. We walked a couple blocks as the sun began to burn our shoulders, eventually making our way to the walk of fame http://www.walkoffame.com/.

The 1.3 miles of Hollywood stars bookended both sides of the street.  Names plastered on each one, beckoning childhood memories and nostalgia. They are in random order, leapfrogging the entire length of the sidewalk. All along the way, hokey, touristy stores promising the most authentic Hollywood souvenirs tempting even the savviest of travelers, including yours truly. 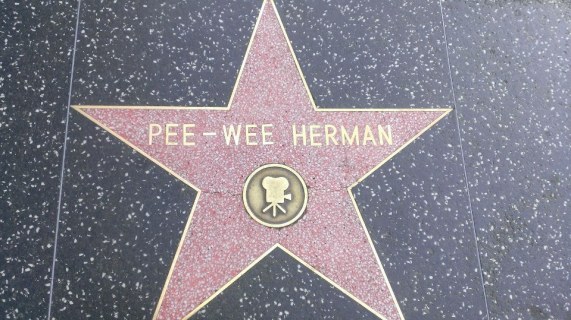 We eventually made it to the Mecca of Hollywood-Grauman’s Chinese Theater http://graumanschinese.org/. A multifaceted display of United Nations of tourists crisscrossing every demographic spilled out onto the sidewalks and surrounding area. On the concrete were engraved sentiments from celebrities spanning 9 decades. Hand prints embedded in the pavement served as a witness to the testament of time. 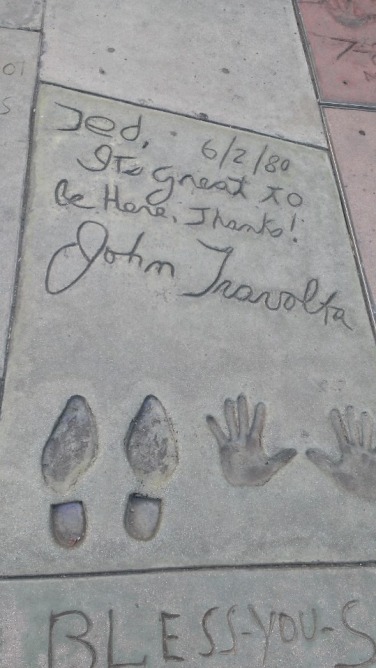 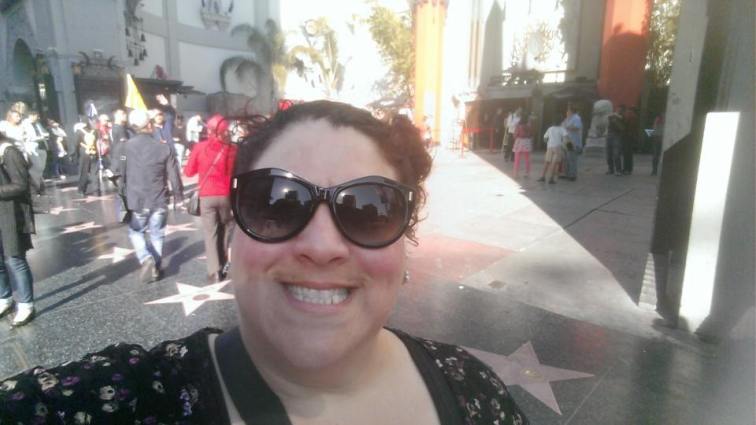 We made our way back to the car with still half of our day still remaining. Our next destination was the Getty Center http://www.getty.edu/visit/ .  This was truly the sole purpose for the entire trip. Having been to a great majority of the most spectacular art museums in the world, including The Louvre, The Hermitage, The Prado and The Met-this had been one of our last conquered museums on our list.

Getting to the Getty is a bit misleading- the first step is an underground garage for parking-then a tram finishes the journey by scaling up a hill to the actual compound. As one steps off the tram, the campus is a bit overwhelming. It is quite expansive and includes 4 buildings all comprised of masterpieces of exceptional art as well as gardens overlooking the valley below.

The Getty itself is free and the only fee is for parking which is $15. Free audio is also included and truly balances out the abundance of art with understandable and interesting explanation. We began our exploration in Renaissance Art and moved our way sequentially through the time periods.

It is an extraordinary display of artists and stands up to any world class museum we have visited. After several hours, we decided to take a break. The museum was packed with people, but the crowds moved through fast and the vast space easily accommodated the multitude of people. We sat outside in the pleasant air, the sun remained bright and sky was an effervescent blue. We ate healthy salads, as children chased each other, lovers kissed and friends laughed.

We continued our trek through the museum as the sun began to fade. We ended our visit walking on the grounds, rehashing our favorite pieces. The emerald green lawn outlining the complex to the edge causing an elusive image, as the lights from the valley below began to twinkle in the dusk.

Driving back to the hotel, feet sore, brain macerated from overuse and overall exhaustion we debated over dinner. A coupon and a suggestion from the hotel was all we needed. We found ourselves a stone’s throw from the hotel at Chica’s Tacos http://chicastacos.com/. Healthy, organic ingredients with essentially zero guilt were the main components on the limited menu. We gobbled up tacos comprised of unique concoctions offered with eye stinging, nose burning, gut twisting spicy sauces that make you want to slap your mama (sorry mom-just a phrase). 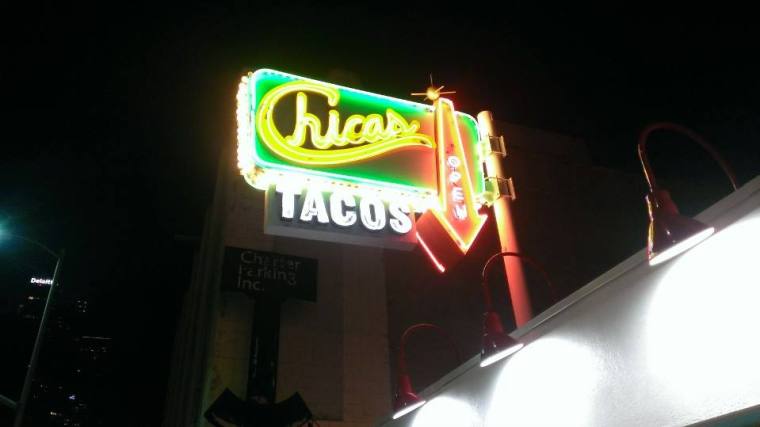 The next morning (our last day) we piled in our sturdy convertible, top down as the cool morning air goose bumped our arms. We drove up the Pacific Coast Highway http://www.pacific-coast-highway-travel.com/ with really no plan. We drove up the winding road that hugged the Pacific Ocean as scaling mountains shadowed over us on the opposite side. The cool air blew through my auburn curls, twisting them into tangled dreadlocks. We stopped at a Malibu Starbuck’s, me half hoping a brief Kaitlyn Jenner encounter or even settling for a Kardashian sighting. None of which occurred.

The Malibu Starbuck’s was popular with good-looking people- all toned, healthy and bronzed. We lingered there a while until fully fueled by caffeine and envy. We continued to drive on the PCH determined to take this as far as it could take us. In our case, as far as the Hubs bladder could last.

Practically throwing his keys at the valet guy and running into a gym that I believe he now has a lifelong membership, signing a contract to use the rest room. This spontaneous but desperate act landed us in Santa Barbara http://www.santabarbaraca.gov/.

A lovely seaside community, we made our way through the artsy village and unique shops. We had a small pizza at Uncle Rocco’s http://uncleroccosnypizza.com/. This divvy establishment boasts the best NY pizza-however, I seriously differ. I regret the wasted meal- having said that, it served as substance and not much more than that. Additionally, it was rather expensive for the cardboard creation. 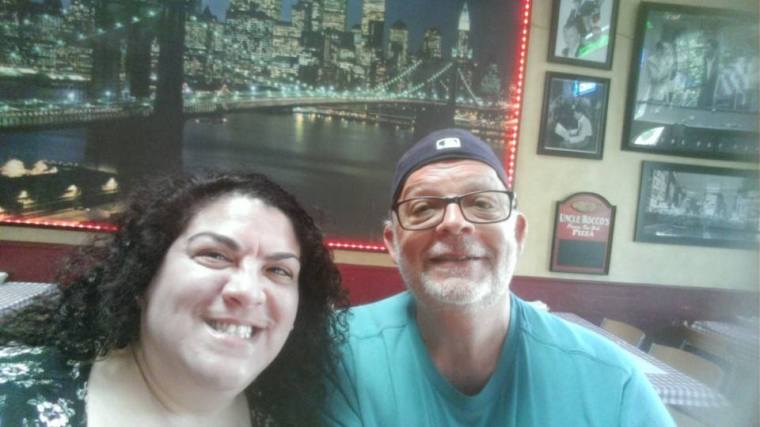 We eventually made our way to the pier- http://www.stearnswharf.org/. The topaz blue water glistened as the sun mirrored off the sparkling sea. The wooden boards of the pier shared space with cars that could literally drive right up on the boardwalk. Nautical themed overpriced stores lined the walkway, with expensive fancy restaurants –thankfully serving as no temptation, due to the tasteless lunch in our gullets.

We made our way back to the car and chose for time purposes to take the highway home. The steady stream of traffic followed us as we headed back. An impromptu turn onto Mullholland Drive http://www.discoverlosangeles.com/blog/scenic-drives-la served as eye candy for this gal. As the Hubs winded up and around the curvy street, we passed million dollar mansions hugging the sides of a mountain. I fantasized about living in such a place as we drove by homes with gated entrances and as I caught a glimpse of a light in the window. For just a moment, I was transported to a life of leisure, imagining unbelievable wealth, splendor and endless riches. We pulled over at a lookout as the sun began to set. I looked out at the magnificent homes and then at my gorgeous Hubs as his blue eyes sparkled against the setting flamingo sky. Reality set in, a reality that may not include a butler or a maid. But, I do have all that a Girl could want as I travel the world with her Hubs and just a suitcase. 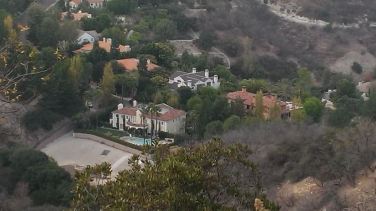 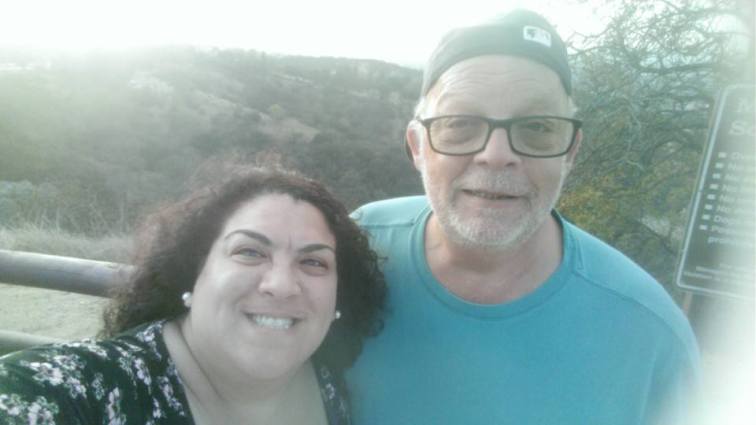 So, that’s what 3 days in California looks like. For yours truly, it was just a taste of that West Coast charm. I hope again to visit it and see all the amazing wonders that it has to offer.

Until next time….A Girl, Her Hubs and a Suitcase will meet up again perhaps in Sicily & Florence October 2017.

Thanks for tuning in…